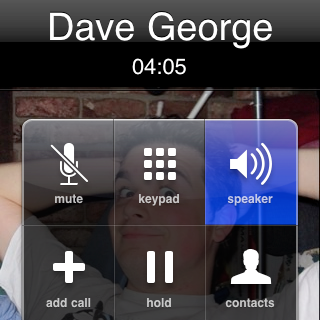 So if you remeber back a little while ago now, I told you all about my audtion for the role of Tracy Turnblad in Hairspray... well what I didn't tell you was this... there were some really annoying girls there that day, and while I knew I wasn't as talented as most of them, I really could bare the thought of having one of them be then next Tracy... simply because they were soooooooo annoying.  However, the good news is this... remember back even further... well actually before you do that head other to my Project365 blog and then remember all the way back to april when I went and saw the musical Fame.  Well that night at fame, I saw something amazing, the lady playing the role of Mabel blew my mine.  Despite not reallying being one of the main characters, this girl stole the show when she sang her song "Mabel's Prayer".  Seriously the crowd was amazed and for me she was hands down the best part of the night.  Anyway, she (her real name is Jaz Flowers) is going to be the new Tracy I just found out and I am very very very please with their choice.  If I was going to 'lose', so to speak, to anyone it would happily be her.

Oh and on a side note... I think that the chorus of Mabel's Prayer will soon become my mantra as I start looking at wedding dresses etc as the lyrics say:


Oh Lord give me a sign
Give me a call on your heavenly line
Tell me, oh Lord, what it is that you want of me
Keep me from eatin' whatever's in front of me 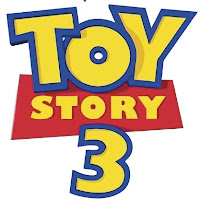 Now most of you will know that I am super super massive Disney fan... And tonight I feel like my life is a little closer to being complete! If you haven't already, you should most definitely go and see Toy Story 3, it is seriously the best movie I have seen in a really really long time. I laughed, I cried, I got scared and I enjoyed some good old Disney Magic.
There is something about Disney and I know I have often talked about this before but I just wanted to tell the world one more time...
Seriously everyone.... do yourselves a favour and get on to it.
Posted by Em at 2:15 PM 1 comment: 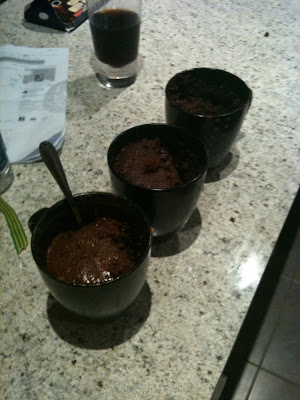 The purpose of this blog is to simply share with you the coolest percussion instruments I have ever seen... a whirly... 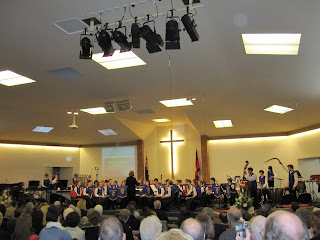 Yep its that big bit of pipe they are swinging around their heads... I had never seen these before and I probably won't see one again for a while, but I tell you what they are pretty cool.  It does make me wonder though what other household items could become amazing percussion instruments.
Also worth mentioning is the guy that was playing the glasses very impressive.
Posted by Em at 9:14 AM 1 comment:

Today Dave and I have been out at the Melbourne Bridal Expo.  Yes, Dave came with me and just for the record, he was not dragged, forced of even bribed, he came on his own free will.
Anyway, I wasn't really sure what to expect, in my mind I pictured this bridezilla fest with people and salespeople going everywhere.  But it turns out it was all a bit civilised.  There was only one lady that looked a little bridezilla, but we managed to avoid her for most of the morning.  I think it was a good chance for Dave and I just to work out what we needed to start thinking about when it comes to our turn once we get back from Sweden.  So I don't really have that much exciting news to tell you... I was hoping that our morning here would bring great stories by the handful, but no nothing really, it was all a bit normal.  So sorry its all a bit of a let down.
Posted by Em at 7:13 PM 1 comment: 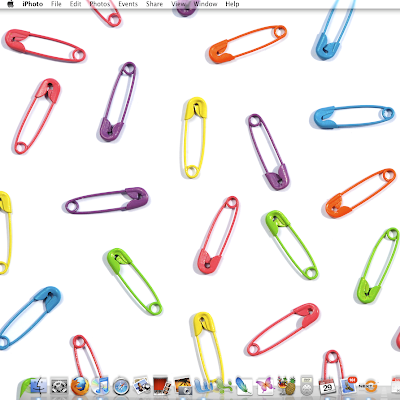 SYG is seriously the coldest, wettest, muddiest and most ridiculous weekend ever... its crazy and after 10years of state youth games, I am still not sure why I continue to go back... but let me give you a quick run down of the weekend:
Friday Night: Swag inside the Girls Marquee... Best. Idea. Ever!  Seriously, I am not really sure why it has taken me this long to think of, but I am pretty sure because of this ingenious idea on night one I will have the warmest and best nights sleeps at SYG ever.
Saturday: Netball - have a look at this team... does it get much better? 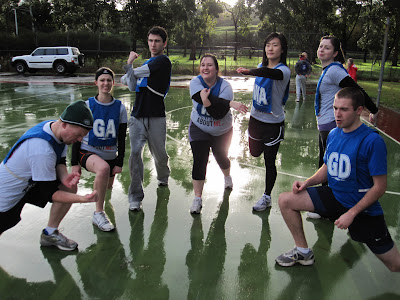 Oh and I played indoor soccer in the afternoon, but its not really worth talking about given that I contributed very very little to my team....
Sunday: Under 18s netball - yep I know I am 23, but they were desperate.  Badminton - I really thought that this was my year... but once again... no.  So I guess that I need to come back to next year to try again, one day I will be SYG Badminton Champion... one day, just not this day.  Oh but in the afternoon I played Volleyball and we won, so at least I got one victory for the weekend.
Monday: The results were in and we came 6th overall - pretty impressive if you ask me... especially considering we didn't really win that much...
So there you go SYG over for another year.
Posted by Em at 2:11 PM 1 comment: 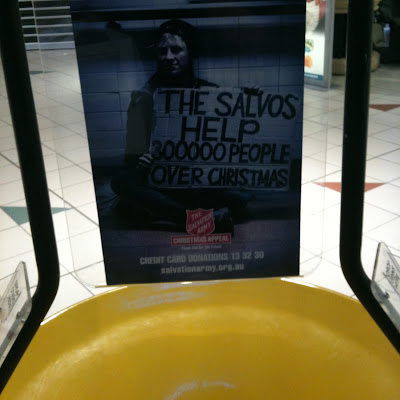 I am a soldier 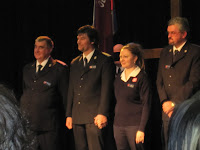 This morning I got to take Russ on his first trip to the country so that I could support so of my awesome Bendigo buddies, Dee and Gus as they were enrolled as soldiers.  Just like when my friend Renee was enrolled, the formalities made me think about the things I have promised to do... and whether or not I am still doing it...  But the crazy thing is at almost the exact same time I as I was witnessing this very cool step by Dee and Gus, Dave was at Box Hill watching Benny get enrolled! 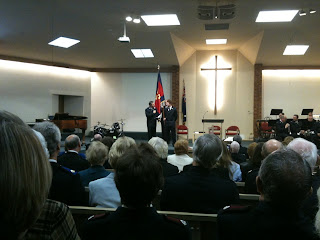 Sometimes I think I forget how much of as step this is, and I am just so proud of these guys as they take the plunge and declare their decision to stand as a soldier in the army of Christ.
Of course, just because this day can't get salvo enough, this afternoon I am heading into the city to a big salvo service to watch the big band play and to farewell the TCs... should be fun....
Posted by Em at 8:13 AM No comments: 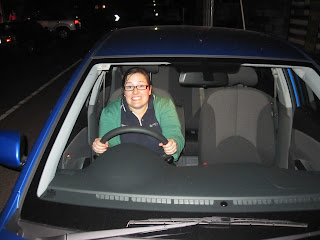 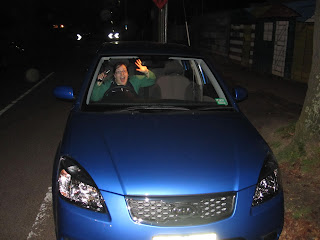 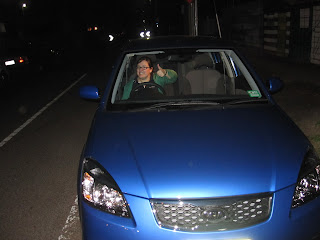 I have had an idea... I know surprising... it doesn't happen often so strap yourselves in.  The thing is though, my idea has been met with very mixed and even quite polarised responses and so now I am a little torn.
So... I am putting it out into the blogosphere... So in a second I am going to share this idea and then below in the comment section, or alternatively, if you are at my actual blog rather than just the facebook version, in the poll on the sidebar... I would like you to vote, it doesn't take long just a yea or a nay and that's it. Of course you can elaborate and say more if you want, however all that's actually required is a response.
So here it is:
I want to cut up my bridal magazines to scrapbook my ideas.
Is it really that bad to cut them up? Is it magazine massacre? Or is it a really good idea? Let me know what you think....
Oh and of course I will let you know what I decide!
Posted by Em at 6:27 PM 2 comments: 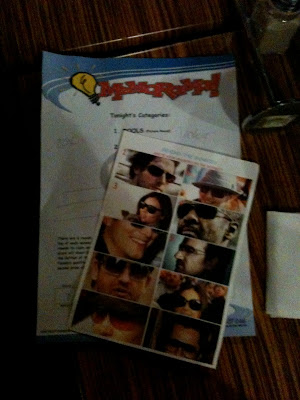 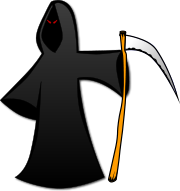 I am the grim reaper of cars... Seriously, yesterday morning I killed my second car in a month and this one didn't even belong to me.
Luckily, unlike Saabie, it will run again and it's just a bit of old age, but I tell you what I am feeling like every car I touch dies! I am even starting to get a little worried about driving my new car, which ironically arrived at the dealer this yesterday afternoon, because at the rate I am going it will either never make it or some one will hit it as I drive out!
I do perhaps thinks maybe I should get a spot in the next RACV TV ad, I mean who else has had them out 6 times in 6 months?  They probably start to panic every time I tell them who is calling, maybe they even roll their eyes and think what now?
Its seriously getting so bad that even now as the tow truck picks up the pintara, the battery on the truck has died and is getting jump started... it really is getting ridiculous!
I guess have I have just been making the most of my bronze membership to the RACV... and the do say... we're there for you!
But because its a bit depressing and my new car is pretty much hear... I just want to remind you of the things that my new car has that these last two have been missing at one stage or another...
1. Heating
2. Radio
3. Windows
4. Central Locking
5. probably something else that I can't think of right now.
So rio.... I am super excited about meeting you... very very very very soon.
Posted by Em at 8:22 PM 1 comment:

Is the door knock dead?

It's red shield weekend... A weekend in May that usually brings out feelings of both frustration and appreciation in salvos, I think all across the world. The thing about red shield is that the idea is great, the cause is great, sometimes the response is great... But when you are out knocking on doors in a freezing cold winters morning, it doesn't feel so great!
This morning I was out collecting for somewhere between an hour and a half and an hour, knocking on door after door in quite an affluent area of Melbourne. The thing is despite the wealth of this area, I am pretty sure my collection bag only totalled about $60... Dismal! Sure there were some people that collected a whole stack more than this, but no where near the amounts in the collection buckets from the intersections...
So today I want to pose a bit of a controversial question... Is the door-knock dead?
Seriously... Think about it? Is there something else we could be doing? More intersections? A radiothon? Maybe even a telethon? What is it that keeps us going back to the door-knock? Is it because of the tradition? Is it for the little old man or women that tells us the have been waiting for us to come all weekend? Is it just so we can all go back to the hall for a pie and our big mac voucher? Or am I just in a bad area?
The thing is, I am all for raising money and don't get me wrong I am a salvo through and through... I am just wondering if we could be doing it better... That's all!
Oh and for all of those that haven't donated yet... Please dig deep and thank God for the salvos!
Posted by Em at 10:12 AM 2 comments: