So we have finally made it to Sweden... and its Ben's turn to give us an update on what's been happening: 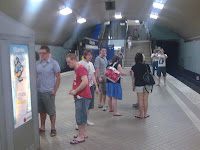 We’re here! We’ve finally made it to the beautiful city of Stockholm after close to 23 hours of flying. But it was all worth it in the end!
Surprisingly we’ve settled into the European time zone pretty well. However we are all extremely tired and very slow to move. It’s probably due to the unexpected heat here in Sweden. The temperature hovers around 30 degrees for the majority of the day and the sun sets for a short amount of time. So it’s completely different to Melbourne weather at the moment.
Our trip began on Sunday night where we all arrived at Melbourne Airport for a 10.50pm departure. We had a slight scare early on when we were checking in our luggage due to an excess baggage problem, but we got there in the end.
We arrived in Hong Kong for a quick re fuel and then flew to London. The two trips added up to around 21 hours, so you can understand that we were already very tired by the time we hit Heathrow.

After waiting in London for a few hours we flew over to Stockholm and were greeted by Sandra, our blonde Swedish tour guide. And it’s fair to say that a few of the big boys were more than happy to be greeted by her. 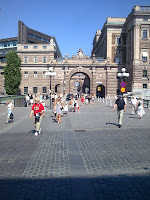 After a good night’s rest, the band undertook a day of sightseeing. Stockholm is a beautiful city surrounded by attractive rivers and, more importantly, attractive people. The combination of old style buildings along with modern-day shopping precincts is just incredible. A lot of the band went on boat tours and explored the royal palace.
Then a few of the big boys spotted up the gym in our hotel for an iron pumping session. And as you can tell by the photos, we were in fine form!

We’ve just come back from a meet and greet dinner with all the other creative arts groups for the World Youth Convention (WYC). There are people here from every continent and a few of us have already made friends with members of Brazil’s own ‘Jesus Gang’. They don’t speak a word of English, but it’s like we’re family already.

Tomorrow we have a full day of sound checks and then the four day conference starts on Thursday.

Will keep you posted. Be good. 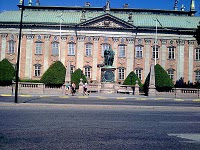 http://astsalvobigband.blogspot.com/2010/07/valkommen-till-stockholm.html
Posted by Em at 10:07 AM